Robert and Margaret Moschini began farming in 1975 on a rented farm in Grafton, MA milking 60 cows. In 1982, the Moschini’s purchased the farm located at 30 Howe Road, Spencer MA from Larry and Barbara Taylor, then known as Taylor Farm. The property was an existing dairy operation in which we continued up until 2004. This farm is now our established footprint, Royal Crest Farm, LLC. During this time, the farm was recognized for its delivery of quality milk, other dairy products as well as compost, hay, corn silage, sandy fill and gravel. However, in 2009 son Anthony graduated from Cornell University with a Bachelor’s degree in Agriculture Science and took over running the farm from his parents’ operation and the farm’s production and sales began to evolve and continued to diversify, while keeping the business in the family. Our farm consists of 365 acres (+ or -) of which 55 acres are tillable, 13 acres are pasture and the balance is mostly woodlands.

We grow hay on 550 acres of cropland throughout Worcester County, MA. This hay is sold to horse and cow customers, as well as fed to our own beef herd. Additionally, we raise 150 head of beef, 12 pigs, 120 chickens and 50 turkeys which are sold through our established retail FarmStore and wholesale to local grocery establishments and restaurants. The livestock are fed a total mixed ration consisting of haylage and corn silage. We grow the necessary haylage, as well as 95 acres of corn annually for the corn silage part of the ration. As a certified composting site and no-waste farm, annually we produce and sell about 3,000 yards of compost. To accomplish this, we haul in goat and horse manure, add in cow manure, hay and wood shavings, blend all the ingredients together to form our organic compost blend. This process takes at least six months to produce our top-quality compost. The compost is by the yard or bag for vegetable and flower gardens; however, some is sold wholesale in bulk to various landscapers, garden centers and Tower Hill Botanical Society.

In 2017, Anthony met Jennifer down in Florida and a few months later she moved up and joined the family.   Jennifer has stepped up to run the FarmStore, as well as handles the marketing and social media for the farm operation. 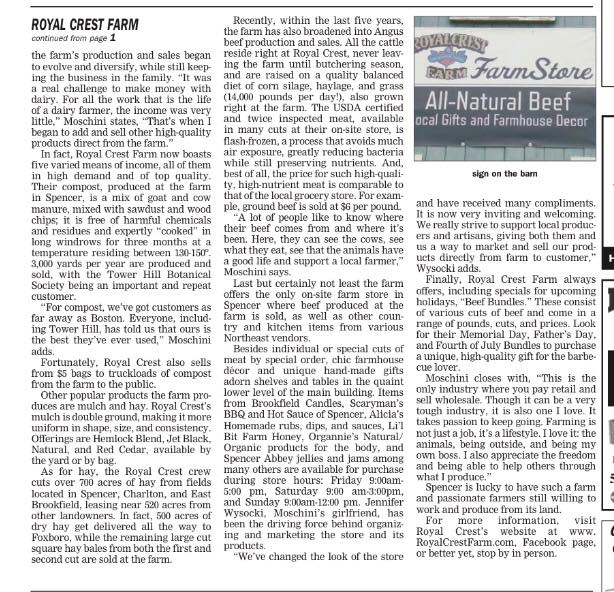